Most of us guys don’t want to look like the muscle-heads we see at the gym. Those huge steroid-pumped guys in bodybuilding magazines just make us sick.

What we really want is to look lean and masculine. We want to look like those celebrities on the cover of Men’s Health magazine…

I remember watching Blade Trinity when it came out. What a shit film. But I’ll never forget the moment I saw Ryan Reynolds go topless. Nothing gay here. I jast saw his body and thought “Oh my God, that is THE perfect physique… I would do anything to have a body like that. Anything”. 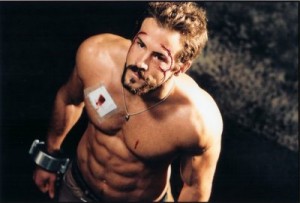 Ryan Reynolds in Blade Trinity – How d’ya get a body like that?

Seeing that movie made me work out like crazy for a good few months.

Now I don’t ever recall a bodybuilding magazine having that effect on me.

See, Hollywood knows what we want. These guys have it figured out. When it comes to the male physique, they know what the women like to see, and they know the kind of physique that men aspire to have.

You don’t often see huge bodybuilders playing the lead role in an action movie. Heck even Arnold had to reduce his size way down for his roles in Conan and the Terminator.

The best way to describe this physique is to call it the “Hollywood” look.

Now of all the books I’ve read on losing fat, building muscle, getting stronger and fitness in general, I’ve only come across one serious guide that focuses purely on how to get the Hollywood look.

The vast majority of other muscle guides are hell-bent on getting you as big as is humanly possible. Either that, or they just tell you “Hey, build what muscle you want, then cut down on your training so you don’t get too big”.

But what these other books don’t get to is…

There’s so much more to getting that powerful Ryan Reynolds Hollywood physique than just bulking up and trimming down the fat.

Since I read Rusty’s book, I’ve met a lot of guys who have a good amount of muscle, and fat percentages in the single digits, and yet they look nothing like Ryan Reynolds did in that movie.

It’s unfortunate that so many of these guys just give up and blame it all on their ‘bad genes’.

But the truth is, Ryan Reynolds did something else that most of these guys don’t know about.

Hollywood stars have access to some of the best, most expensive personal trainers in the world. These guys would never give away their secrets by blogging about them or writing books. That’s why you rarely see these methods being discussed here on the internet.

What Rusty suggests in his book, is that after you’ve grown the amount of muscle you want, you change your training to target the contractile proteins within your muscle cells. You do this by changing certain exercise parameters. For example, you lift heavier, reduce the number of reps, and increase the time you rest between sets.

What this does is it increases the density of your muscles, and makes them harder at rest. Most guys who lift weights at the gym end up with soft, rounded muscles that don’t look very attractive at all, and don’t make you look very strong.

With Visual Impact Muscle Building, you’ll learn how to give your muscles that chiseled look. Your muscles will look angled, with sharp edges. Your body will feel harder, and as a bonus, you’ll also be stronger and feel more athletic.

Now you might argue, “Hey, I’ve heard about all this muscle ‘density’ stuff before, there’s nothing new about that.’

Of course, Rusty didn’t invent muscle density training. But what’s unique about Rusty’s book is he’s the only guy I’ve come across who gives you a detailed plan on how to convert soft muscle to hard muscle.

See, before I read Rusty’s book, I used to train for growth and train for muscle hardness (i.e. myofibrillar hypertrophy and neurogenic tone) separately during different workouts. What Rusty shows you in his book, is something called ‘hybrid’ training, where you combine both types of training in one workout.

Tweak Your Training to Get The Look You Want

Want Gerard Butler’s abs? Taylor Lautner’s traps? Ryan Reynold’s Shoulders, and Daniel Craig’s chest? No problem. Rusty shows you how to tweak your routine depending on what you want.

Another thing I like about Rusty’s book is he teaches you the fundamentals, so you can go and tweak your workout to achieve the look you want. Then you can adjust your workout depending on how your body responds.

One thing I particularly like is he goes through case studies of guys with different types of physiques. Rusty shows you pictures and points out where different guys have gone wrong with their physiques. It’s amazing how a little too much muscle in just one body-part can throw all your hard work down the drain.

The author goes into detail on how you can customize your physique by changing different parameters in your workout.

At the end of his 3-phase workout routine (read about the 3 phases here), Rusty throws in a bonus phase, where he talks about a special secret revealed by Taylor Lautner when he trained for New Moon.

It’s called the “shrink-wrap effect”. This is an advanced technique you should only use after you already have some level of ab definition. 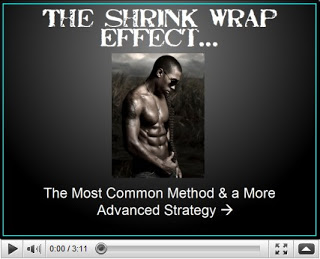 Tighten the skin around your muscles with the “shrink-wrap effect”, and stay shredded for an entire summer!

See, the problem with getting extremely shredded and defined and looking like a warrior on the beach, is with most people, the skin is too loose for the abs to be visible without special lighting.

The shrink-wrap effect is a special tweak that makes your skin wrap tightly around your muscles, so you look totally ripped – like your body was carved out of a thousand-year-old rock.

Unlike the typical “carb-loading” that guys use at the gym, the shrink-wrap effect lasts for months, and if you do it properly, it can last you the entire summer.

Imagine walking around all summer in a body that looks like an anatomy chart.

How To Get Results Quickly

In traditional bodybuilding circles, you’ll be told that it can take 15 years or longer to reach your genetic potential in muscle growth.

While this may be true, fortunately when it comes building the Hollywood look, you only need to reach a small percentage of your genetic limit before you can start the muscle-hardening process.

It may take 10-15 years to achieve 90% of your genetic potential in muscle size, but you can easily achieve 60-75% within a year. That’s more than enough muscle for the Hollywood look.

This is really encouraging, because it means you can get some decent results in just a few months or even weeks of getting started.

Visual Impact Muscle Building is one of those rare books that really brings something new to the table. A lot of the stuff Rusty discusses in the book, I’ve not seen discussed anywhere else on the internet, or indeed in other book.

Rusty does more than just give you a step-by-step workout routine. He teaches you the skill of getting the look you want. He arms you with knowledge so you can go and devise your OWN exercise routine and sculpt the body you want.

Seriously. What do you want to look like? Wanna look like a bodybuilder? Or do you prefer the ‘GQ’ look? Or maybe you’d rather get that men’s health cover-model look, or the hollywood look? Maybe you’ve been inspired by a particular Hollywood actor.

Whatever body you want, Rusty’s book, Visual Impact Muscle Building is an excellent place to start.

To get Rusty’s book, or to learn more about the program, click this link to go check out the Visual Impact Muscle Building home page.